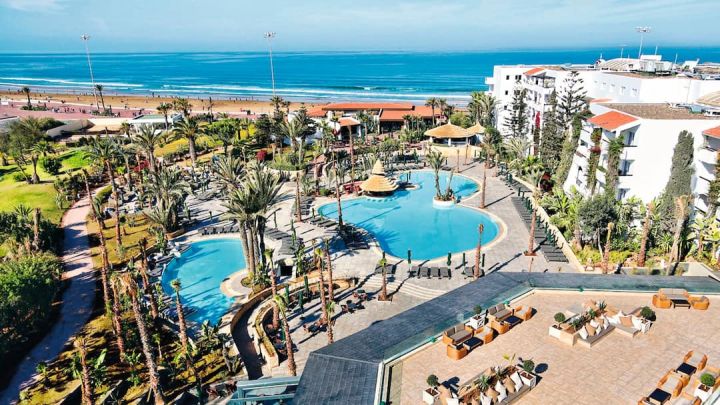 from£740pp
Holidays
Central Cape Town apartment with Table Mountain views and flights!
Flights are the cheapest we've seen and the apartment is located in the heart of the city
from£740pp

Holidays in Africa: The best travel deals to Africa

Africa offers beautiful landscapes, stunning animals, and many incredible countries to choose from. Here, you'll find our guide to touring the stunning continent, as well as great deals on cheap flights to places like Cape Town and Kenya, affordable safari glamping resorts and plenty of other options.

Africa is a vast continent with breathtaking sceneries made up of 54 very different countries, cultures and identities. It is a smorgasbord of exciting travel destinations with something for everyone: exhilarating dune rides in Morocco and some of the world’s best snorkelling in Egypt in the north, exotic safari adventures in Kenya in central Africa, powder white beaches on the paradise islands of Zanzibar, Mauritius and Seychelles, incredible biodiversity in Madagascar, and, all the way down south, penguins and rolling vineyards in South Africa.

So let’s start from the top in the very north, and work our way down to the south, listing some (not all) of the best places to visit in Africa.

Located in Northern Africa, Morocco is a popular year-round destination thanks to its relatively high winter temperatures and dry summers.

Marrakech is rich in history and architecture and a great choice for a city break with plenty of sightseeing and shopping on offer. The bustling souks in the medieval Medina are a real feast for all the senses, and if it’s adventure you are after, look no further than the Sahara Desert – there are many organised tours where you can go on Jeep safaris in the dunes, ride on a camel, and sleep in luxury glamping tents overnight in the desert for a taste of Bedouin life.

For culture fans, the ancient city of Fez is one of Morocco’s most underrated cities, offering a plethora of vibrant souks, spice markets and bathhouses (hammams) along its dwindling streets.

Then there’s Agadir, one of the most popular beach destinations, offering a more laid-back atmosphere and waves that appeal to surfers.

Holidays in Morocco - Go 4x4 in the dunes

No stranger to British holidaymakers, Cape Verde offers great beaches and guaranteed winter sun. There are plenty of direct flights to Sal and Boa Vista islands from the UK, giving the Canary Islands a real run for their money. Plus, there is no time-difference to worry about!

This independent island nation is geographically located off the coast of western Africa, but is more westernised and has close ties with the European Union. The culture here is a vibrant mixture of African, Caribbean, Portuguese and Brazilian influences.

Cape Verde is great for sun-worshippers and thrill seekers alike – you can go kite-surfing, or explore under the surface with great diving and snorkelling conditions on offer. Why not hike up a volcano, jump on a quad bike or try your hand at fishing?

Just remember one thing: “No stress”, which is the local Cape Verdean motto.

Egypt packs a real holiday punch with awe-inspiring ancient architecture and attractions shrouded in mystery – think the Great Pyramids, the Great Sphinx of Giza, Valley of the Kings and the legendary Nile River. Then there are the great all-inclusive beach resorts on the Red Sea Riviera, flanked by beautiful turquoise water.

Hurghada  is one of the most popular resorts, with a myriad of luxe hotels catering to families as well as those looking for an adults-only experience.

There are snorkelling opportunities aplenty here, along with loads of cultural tours and excursions on offer: You could visit the pyramids, poke around Pharaoh’s tombs and take a full day trip to Cairo to explore the Egyptian Museum when not lapping up the sun.

Holidays in Egypt - Ride along the Nile

Kenya in East Africa is the number one most visited destination in the region, averaging over 2 million international visitors per year. It’s not hard to see why. Famous for its beauty and exotic wildlife, here you will find a savannah teeming with life, scenic mountain backdrops, a beautiful coastal region and overall great weather. Not sold yet? Take time to rewatch The Lion King. (The creators got most of their inspiration from Kenya and neighbouring Tanzania!)

Embark on a thrilling safari adventure to spot “The Big Five” (lion, leopard, rhinoceros, elephant, and Cape buffalo), or behold The Great Wildebeest Migration (the annual migration of giant herds of grazers), also called “The World Cup of Wildlife”. Lake Nakuru, famous for its flamingos, is another top sight.

If you are after some beach time you can often find combined safari and beach packages, as both Mombasa and Diani Beach offer top beach digs and gorgeous white sandy beaches.

Zanzibar is the semi-autonomous beach haven off the coast of Tanzania consisting of a group of islands. It is a year-round destination offering glorious weather with average daytime highs between 28°C and 32°C.

Here you can expect powder white beaches, wide-stretched spice plantations and a rich history, traceable in Zanzibar’s old Stone Town (set within Zanzibar City), which is now a UNESCO World Heritage Site with loads of sightseeing on offer.

Experience a ‘blue safari’ boat tour in search of wild dolphins, take a walk around the legendary Freddie Mercury's birthplace, and get a snap of the Instagrammable Rock restaurant when not busy lapping up the sun.

The stunning Seychelles is made up of 115 exotic islands situated way out in the Indian Ocean, off the coast of East Africa. The three main islands are Mahe, Praslin and La Digue, which are relatively close to one another – perfect for island hopping! Think turquoise waters, lush flora and fauna, cool rock formations and rare giant animals, such as the Aldabra tortoise.

Apart from sunbathing and snorkelling, other musts include visiting the aforementioned giant tortoises at the conservation centre on Curieuse Island.

And a visit to La Digue will make you feel like you’ve traveled back in time, as there are barely any motor vehicles there. There you can also behold the spectacular rock formations on Anse Source d’Argent beach, guaranteed to take your breath away.

Ever heard of Darwin's Bark Spiders, Aye-Ayes or Giraffe Wheevils? They are just a few examples of the weird and wonderful animals that are indigenous only to the island of Madagascar – one of the most unique places on earth. (Another, more famous character, is the iconically cute ring-tailed lemur, which you will have seen in DreamWorks animated blockbuster, Madagascar.)

Some top pastimes on Madagascar include swimming with the world’s largest fish, the whale shark (no, they don’t eat humans!), and walking along the Avenue of the Baobabs – an “avenue” of huge, otherworldly trees. And speaking of trees: the Tsingy de Bemaraha Strict Nature Reserve is a labyrinth of spiky, grey limestone rocks – the largest stone forest in the world.

Aside from its astounding flora and fauna, Madagascar is also home to some sparkling white beaches.

Situated in the Indian Ocean, the tropical paradise of Mauritius is famed for its palm-fringed, powder soft beaches, crystalline water and reefs abundant with life. It is a favourite amongst honeymooners and families alike.

Flic en Flac on the west coast is home to some of the island’s best beaches. Or, if you are hunting for the more deserted kind, jump on a catamaran cruise to any of the small, uninhabited islands surrounding Mauritius.

The blue, green, red and yellow soils of the Chamarel region – the so called Seven Coloured Earths – makes for a unique experience, and you will also find the stunning, 100 metre Chamarel waterfall nearby.

A visit to Port Louis, the island’s capital and old colonial city, is a must. As is a visit to the old sugar factory L’Aventure du Sucre, where you can sample rum – every pirate’s favourite – and familiarise yourself more with the island’s history.

The huge South Africa makes up the southernmost tip of Africa, and is famous worldwide as an adventure central, thanks to the iconic Kruger National Park with its exhilarating safari tours. But it is also popular among beach bums for its stunning coast, attracts culture buffs with its checkered history, and appeals to wine lovers with its rolling vineyards.

Renting a car is the best way to take in all that South Africa has to offer, and the Garden Route is the scenic 200km drive along the beautiful coastline from Cape Town in the west to Port Elizabeth in the east. There are many great stops along the way, one being the Addo Elephant Park.

In Johannesburg you can visit the Apartheid Museum, and take a tour of Nelson Mandela’s former house. Meanwhile, over in Cape Town you can grab a cable car to the top of Table Mountain with spectacular views of the city. Did you know that Boulder’s Beach, just outside Cape Town, is not only a family-friendly beach for sun lounging, but also a popular hangout place for African penguins?

A visit to Robben Island, the former maximum security prison, makes for an educational – and to some extent unsettling – excursion.

from£740pp
Holidays
Central Cape Town apartment with Table Mountain views and flights!
Flights are the cheapest we've seen and the apartment is located in the heart of the city
from£740pp